IDAHO momentum grows around the globe

What used to be known exclusively as a state in the American Northwest is now also an acronym for the International Day Against Homophobia movement – IDAHO, commemorated around the world on May 17. Justin Ellis looks at how grassroots movements on the Internet are rallying advocates to the IDAHO cause.

Launched initially as a national event in Canada in 2003, IDAHO is commemorated on May 17, the day in 1990 when the World Health Organization removed homosexuality from its register of mental disorders, ending over a century of institutionialised homophobia in medicine. Homosexuality is no longer considered pathological in most countries, but homophobia is still pervasive.

There was only one thing worse than being called a poo pusher by a total stranger. It was that feeling of disgust about my own lack of resistance to unprovoked homophobic slurs. In response to these frequent attacks in Sydney, and more recently in Auckland, the bird gesture works particularly well for my boyfriend. And that’s fine if you’re an imposing 6-foot-2 (1.88m) half-Fijian. 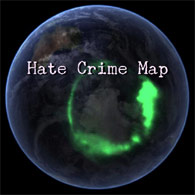 If you’re not - or not as bold, the Internet offers an avenue through which to express your exasperation in a non-threatening, constructive way and add your voice to the growing campaign against homophobia around the world. In conjunction with the IDAHO Sydney Exhibition, Sydney-based artist Luke Callaghan has created a Hate Crime Map, to provide victims of homophobia with the opportunity to record their experiences in an ongoing, interactive digital collaboration.

The map highlights that even in the dawn of the age of the same sex marriage, and even in perceived gay meccas like Sydney, homophobia is everywhere.

“My main objective is to support people rather than this being a political thing,” says Callaghan.

“I want to give people the opportunity to articulate their responses to homophobia, and I want to support anyone in the LGBT community that has experienced homophobia or who is currently living with homophobia. I wanted to document in real places, real events - the violence. The simplest and most effective way to do this was online. The digital sphere helps us reach more people and increasingly the medium offers the potential to provide a tangible and concrete outcome compared to just sending an email.”

Online advocacy offers a whole new dimension in combating homophobia, says Sydney based Canadian LGBT activist Randall Pearce. “It’s a lower level of commitment, but it makes a broader-based engagement possible. The fair-minded straight man sitting at his computer for example, can be an activist just on the basis of his beliefs. He can take a position and add his support to a democratic movement.” 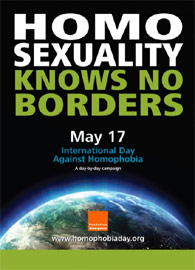 2009 campaign poster
The provocative advocacy website and organisation Avaaz combines activism, marketing and humour on the web, and largely takes the act out of the activism. Through using email circulars that can be forwarded to multiple recipients the organisation isn’t breaking new ground, but it’s mix of arresting videos, images and text coupled with an irreverent tone, has proven that you don’t have to be earnest to be heard or to be effective. Avaaz, which means voice in many Asian, Middle Eastern and Eastern European languages says “the rise of a new model of internet-driven, people-powered politics is changing countries from Australia to the Philippines to the United States.

“Avaaz takes this model global, connecting people across borders to bring people powered politics to international decision-making.” Avaaz’s recent campaign against the Pope’s comments about condoms contributing to AIDS infection rates has over 200,000 esignatures and counting.

The greatest benefit of digital advocacy is that it works nicely alongside conventional advocacy to provide those who wouldn’t have registered their protest publicly, with a way to do so in private, and anonymously.

As integral to homophobia as victim hood can be, Foundation Emergence, the organisation who spearheaded IDAHO, says that International Day Against Homophobia should be seen as a great opportunity to highlight positive aspects of homosexuality and celebrate the contribution of lesbians and gays to society. This year’s theme is ‘Homosexuality Knows No Borders’, in support of LGBT immigrants and refugees around the world who may come from societies where homosexuality may be pathologised or criminalised or both.

IDAHO aims to reach all groups of society, regardless of their sexual orientation, and emphasises the negative, ongoing psychological affects internalised homophobia has on the LGBT community in addition to widespread homophobia in the broader community.

Luke Callaghan hopes the Hate Crime Map will ultimately have as broad an exposure as the IDAHO vision and says the measure of success for the Hate Crime Map will be to have an ongoing documentation of homophobic crimes. “The Hate Crime Map has impact because it isn't a bureau of statistics survey. It is a personal response to homophobia that documents real events, responses and stories about what members of the GLBTIQ community experience on a far too frequent basis. People can give as little or as much information as they want. The more people that contribute, the more powerful the map will be."

Related events in the Asia-Pacific

Australia, Sydney (NSW)
idahosydney.wordpress.com
IDAHO Sydney is conducting a series of workshops in the lead up to the launch of Idaho the Exhibition on May 16, and has set up a hate crime map to anonymously document where people have experienced homophobia. Community Action Against Homophobia (CAAH) will hold a rally at the "I have a dream" mural on King Street, Newtown, starting at 1pm, on May 17 to “draw attention to the unfair treatment and mandatory detention of LGBTIQ refugees and asylum seekers, the ongoing ban on same sex marriage, the need to tackle Transphobia around the world, and to continue its work towards an end to homophobia on both individual and global level.” For more details, visit the CAAH website at caah.org.au

Australia, Victoria
stophomophobiatoday.com
A special series of radio broadcasts on JOY 94.9 have been planned from April 29 to May 17. The programmes are streamed online at www.joy.org.au and IDAHO content will be available as podcasts.

Bangladesh, Khulna
Members of Khulna’s LGBT community will commemorate IDAHO for the first time on May 17 with a discussion about sexuality, gender discrimination and homophobia; a screening of Milk; followed by a gathering at Hadis Park after which participants will deliver leaflets about homosexuality and homophobia to their heterosexual friends. In Bangladesh, homosexual sex is criminalised under Section 377 of the penal code. For more info, contact red_door83@yahoo.com.

Cambodia, Phnom Penh
phnompenhpride.blogspot.com
Phnom Penh Pride 2009 which takes place between May 12 and 17 will coincide with International Day Against Homophobia 2009. Events include an art exhibition, film screenings, workshops and social events.

Hong Kong
idahohk.org
The 5th IDAHO rally will start at 3pm on Sunday May 17 in front of the Legislative Council and will march up to government headquarters. Organisers are lobbying the government to create anti-discrimination laws based on sexual orientation and gender identity. Organisers include For My Colours (joint committee), Women Coalition of HKSAR, Midnight Blue, Ten Percent Club, HK Sexuality Society, Amnesty International Hong Kong Section, Hong Kong Tongzhi Special Zone, and Rainbow of Hong Kong. See Facebook page.

Japan, various cities
A number of events including symposiums, talks and film screenings are being held in Tokyo, Osaka, Nagoya and Kyoto. Click here for the latest updates (in Japanese only). Tokyo Pride Festival will be held on May 23 at Yoyogi Park Event Area & Outdoor Stage. More into at tokyo-pride.org/festival.

Singapore
pinkdot.sg
Singapore will see what organisers say is "the first-ever official LGBT public gathering in Singapore" on May 16. While it’s not officially tagged as an IDAHO event, organisers are asking the LGBT community and its allies to come out and make a stand against prejudice and bigotry. Venue: Hong Lim Park, Singapore/ May 16, Sat, 4.30pm. See Facebook page.

- Compiled by Sylvia Tan. If you know of other related events, please add them as a comment below or email us using an online form.
idaho, international day against homophobia