Justin Ellis tracks down the organisers of the first gay pride march held in Manila in June 1994, and asks if marches are effective in creating awareness and pushing for LGBT civil rights.

When a small group of vocal gays and lesbians took to the streets in Manila in 1994, not only were they marching for the first time to put gay rights on the political agenda in the Philippines, they were also the first to do so in Asia. Fifteen years later, it’s a national event that continues to keep the LGBT community visible in country, and gay pride marches are widespread throughout the region. 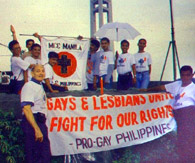 Marchers at the Manila Pride March in Quezon City on June 26, 1994 - the first gay pride march in Asia. The march was organised by Progressive Organization of Gays in the Philippines (PROGAY Philippines) and Metropolitan Community Church (MCC) Manila. Organisers Oscar Atadero (far left with his arm raised) and Fr. Richard Mickley (front left) are pictured in the photo above. Photo courtesy of PROGAY.

Filipino gay activist Oscar Atadero remembers the early 90s well. He says it was a curious time for the LGBT community in the Philippines as gay activists were active, but not in putting their own rights on the political agenda.

“There were gay activists on television mouthing human rights for other downtrodden people, but even the gays who were out on television considered it impolite to bring attention to themselves or to the issue of homosexuality. Lesbians and tomboys were virtually absent on TV, and the few who were there preferred to focus on feminism, not lesbian feminism.”

That all changed on June 26, 1994, when ProGay Philippines and the Filipino Metropolitan Community Church staged the first gay pride march in the country, and what turned out to be the first gay pride march in Asia. As one of the main organisers of the march, Atadero remembers it marking a revolutionary break in the way the public perceived LGBT people in the Philippines.

The small group of about 60 people marched from EDSA on Quezon Boulevard to Quezon Memorial Circle, carrying placards and chanting for equal rights.

Fr. Richard Mickley, founder of the Metropolitan Community Church of the Philippines, the first openly gay and lesbian organisation in the country, was invited to the Philippines by LGBT activists to give voice to the invisible LGBT agenda at that time. He arrived from the USA in 1991, and as well as his church co-sponsoring the pride march in 1994, he gave the keynote address at the rally afterwards and delivered a Queer Pride Mass in the devoutly Roman Catholic country.

Fr. Mickley says pride was a particularly apt name for the march, as for the first time the LGBT Filipino community had come to stand up, march, and be seen.

“The march itself was quite small, but the TV exposure was big. The media coverage meant that we had exposure on television talk shows for months and years to come. The most popular talk show in the country invited a number of gay activists, including me, to their show in September (1994) and after that I was recognised in restaurants, banks, even in buses and on street corners. People came up to me to say, ‘Thank you for what you are doing for us.’"

The success of the parade in raising the visibility of LGBT people and their rights in the Philippines is unquestionable. And in a country where the Catholic Church actively discriminates against homosexuals, perhaps it comes as no surprise that the first pride march in Asia was held in a country where LGBT people have a very clearly defined public enemy, and very tangible injustices to work toward eliminating.

But Jonas Bagas, Secretary General of the Lesbian and Gay Legislative Advocacy Network (LAGABLAB) says the march had more to do with the political climate at the time. “The first Pride March in Asia took place in the Philippines because of the political space provided by a post-martial law environment. Coming from a popular uprising that toppled the Marcos dictatorship, there was a prevailing tolerance toward expressions of diversity and dissent. This was not the case in many Asian countries then.”

And for a country with such a politicised constituency, it seems surprising that 2008 was the first year since the inception of the Manila gay pride march that there has been any protest to it on the street. Atadero says that gay pride marches in the Philippines haven’t achieved a big enough size as yet, to raise large anti-gay sentiments.

“It’s also tempered by homosexuality in the Philippines being tolerated as part of the social structure, as long as that hidden part knows its place in society; working in salons, prettifying the wives of politicians or campaigning for political bosses at elections. Filipino politicians, and that includes church politicians, are known to be patronising about what gays say but they won't be caught saying bad things, preferring to say that gays are part of society but that gay sex is sinful, and yes, gays pay their taxes but they better not have sinful sex.”

A perennial debate in the Philippines, and throughout the global gay community is whether pride marches should be political or celebratory. Bagas says the issue in the Philippines has been under constant discussion since the late 90s.

“I think any Pride March is inherently political. There is recognition that any expression of LGBT rights and LGBT pride in a deeply Catholic environment is necessarily political, thus we have always been conscious of focusing our message on the issues of diversity and equal rights. How it comes across to the broader public is entirely a different matter - for the right, a political call from a marginalised community like LGBT people is always threatening. Without the political call, however, the gay pride march here would be trivialised as a tabloid parade of men and women in costume.”

Atadero says the very image of a gay Filipino holding a placard with a gay rights slogan on it is political, and that until now government officials have been scared of gay rights and gay pride.

“Very rarely do they march in pride. They give money grudgingly on the condition that their names are not mentioned, yet they splurge on drag pageants. For so long, gays have believed that their role has been to provide lip synching entertainment to the masses during drag pageants.

“Pride marches are not yet that big. But at any of the hundreds of drag pageants across the country every night you can have a combined audience of 100,000. And drag beauty pageants do not mention gay rights, pageants only venerate the name of the politicians who give the money.”

While it is indisputable that gay pride marches in the Philippines have created a public space within which the Filipino LGBT community can agitate and raise awareness, have they brought about changes in civil rights for LGBT people? Bagas says the organising of the pride march in the Philippines runs parallel to efforts to pass anti-discrimination legislation in Congress.

“It is a platform from which to not only pressure legislators to push for LGBT rights, but also a venue to change the public's consciousness and views about homosexuality, a more strategic endeavour. However, if we want it to be an effective tool to push for LGBT civil rights, we need to scale up our organising, increase participation by engaging in community organising and get back to grassroots.”

The 15th anniversary of the first Pride March in the Philippines and the first in Asia will be commemorated at the 2009 Baguio LGBT Pride Parade on Sunday, June 28, on Session Road.

Indignation (Singapore)
Singapore's annual indoor Pride Season is expected to take place in August. Details will be announced on plu.sg/indignation

Taipei Pride 09
Organisers have announced October 31 to be the date for the 2009 Taiwan Pride Parade. The event is notably the largest of its kind in Asia with over 18,000 participants in 2008 and 15,000 in 2007. Details will be announced on twpride.info.

Hong Kong Pride 09
The second LGBT pride march is expected to be held in mid November.