The latest 2008/9 MSM community testing project showed the prevalence to be 2.6 percent, down from 3.1 percent a year earlier, Prof Roy Chan, President Action for AIDS (AfA), told Fridae when asked to comment on the record number of new cases. Some 1,200 men were tested in the latest project compared to 960 the year before. The voluntary, free and anonymous testing service was made available at selected MSM frequented venues including bars and saunas late last year.

"Efforts to increase HIV awareness has not fallen on deaf ears. AfA believes that our efforts to stem the spread of HIV in Singapore in the last 21 years has been reasonably successful among MSM. HIV seroprevalence has remained stable... We have one of the lowest infection rates in any major metropolitan area in the world," said Prof Chan.

"However we cannot be complacent. MSM individuals and groups must continue to mobilise to increase awareness and action to stop the spread of HIV in the community."

According to statistics released by the Health Ministry (MOH) on its website last Wednesday, the number of new HIV infection cases among gay men and bisexuals recorded last year is at the highest since Singapore began keeping track in 1985. 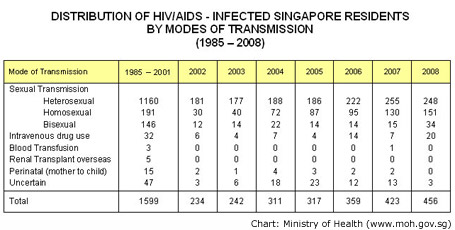 In total, 456 Singapore residents were newly reported with HIV infection last year bringing the total number of HIV infected Singaporeans to 3,941 as of end 2008. If those, 1,799 are asymptomatic carriers, 914 had AIDS-related illnesses and 1,228 have died.

The statement further noted that 50 percent of the new cases last year already had late-stage HIV infection when they were diagnosed, mirroring a similar trend found in previous years.

When asked to comment on the record number of new cases, Prof Chan told Fridae that it is "troubling that we continue to record increasing numbers of HIV infections in the country, despite increased funding and expanded and more intensive educational programming."

He also highlighted that the increase in numbers may be the result of an increase in the number of MSM (men who have sex with men) who undergo voluntary testing as they are "more aware than others of the risks of contracting diseases through unprotected sex." The Health Ministry’s press release noted that “a higher proportion of homosexuals had their HIV infection detected via voluntary screening compared to heterosexuals (24 percent vs 3 percent), similar to 2007 (29 percent vs 5 percent). 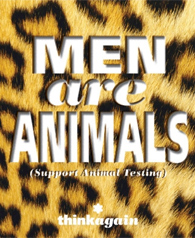 "However we cannot deny that there are still significant numbers of MSM who indulge in unsafe sexual practices. The majority of MSM are educated and knowledgeable, and are well aware of the risks of such behaviour; however for a variety of reasons some have chosen to be reckless and careless." Said Prof Chan who has been involved in the voluntary community-based organisation since the late 80s.

He further said that many MSM have multiple concurrent partners, which carry the highest risk of disease transmission if sex is unprotected, compared to having serial multiple partners.

Citing "ever increasing opportunities for meeting and having sex - whether it be in saunas, bars, clubs, parties or over the Internet," Prof Chan urge venue and business owners to play their part to ensure that clients and customers are well informed, and behave in responsible manner when they are in their premises or communicating in cyberspace.

Experts recommend that sexually active gay men get tested for HIV every 12 months.

For a list of six other clinics that provide anonymous HIV antibody testing in Singapore, click onto hpb.gov.sg/aids

For anonymous testing sites in other Asian cities, click onto fridae.asia/kys and select <WHERE>.