Two events at the ongoing festival have reportedly been cancelled by the authorities.

The organisers of China's first Gay Pride Festival have been told to cancel two of their events, the BBC web site reported.

The Jun 10 screening of the lesbian-themed Lost in You, a 2006 feature film by China-born director Zhu Yiye was cancelled.
Organised by a group of mostly expatriates who also run Shanghai LGBT, a social group and email list with over 1000 members, the weeklong event features film screenings, and other social events.

Hannah Miller, one of the organisers, told Fridae that the group has not planned any parades or any events in public spaces, and are well aware of the country’s strict laws on public gatherings.

It appears that the Jun 10 screening of the lesbian-themed Lost in You, a 2006 feature film by China-born director Zhu Yiye was disallowed.

On the same day, the state-run English language China Daily in an editorial titled 'Pride of tolerance' gave the event a thumbs up saying it is a “good showcase of the country's social progress alongside the three decades of economic boom.”

“Shanghai Pride 2009 should be a source of great encouragement to the tens of millions of ‘comrades’, as homosexual men and women are called in the Chinese mainland. 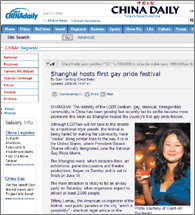 The state-run English language China Daily quoted co-organiser Tiffany Lemay, an American expatriate, as saying: ""Shanghai Pride is a community building exercise. We hope to raise awareness of issues surrounding homosexuality, raise the visibility of the gay community, help people within our community to come out, and build bridges between the gay and straight communities."
“Meanwhile, the festival, though bereft of the massive street parade that is a feature of gay and lesbian festivals elsewhere, is also sending a strong signal to the 1.3 billion Chinese about greater acceptance and tolerance.”

The report estimates the population of homosexuals in the country to be between 30 and 40 million. Another article highlighted the festival and its organisers in a celebratory tone.

Netizens have observed that the festival has not been reported in the Chinese-language press despite the reports in China Daily and international news sites.

The BBC reported that officials have warned the owners of two venues planning to hold a play and a film screening they would face "severe consequences" if they went ahead.

Organisers also announced – via its official web site - the cancellation of the Open Bar event scheduled to be held tonight at Shanghai Studio. No reasons were given for the cancellation.

Other events including ‘The Big Bash’ on Sat, Jun 13, which organisers expect 2,000 people, appear on track. Organisers did not respond in time for this article.