Unnoticed and unmourned, the pride parades in Thailand have come to an end. What happened? Doug Sanders reports from Bangkok.

The Thai paradox is (a) a higher level of comfort with sex and gender diversity than elsewhere, but (b) no ‘out’ political or entertainment figures and limited LGBT rights activism. The Nation newspaper commented in an editorial in 2007 that the country “has traditionally been quite tolerant towards homosexuals and transvestites, who are widely regarded as a pretty harmless aberration to the norm…” How’s that for a tolerant putdown?

Things seemed to change in 1999 when we saw the first Bangkok Gay Festival, with a parade at Halloween in the central business district. A real live parade! Obviously (to outsiders), this was a “pride” parade, like those in the West, designed to stake out gay (and later lesbian) visibility in a society that limply ‘tolerated’ sexual diversity. 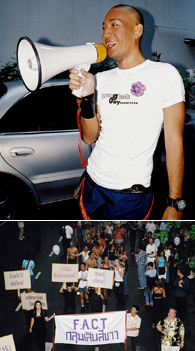 Above: Pakorn Pimpton, a dancer and drag performer, organised Bangkok's first gay pride parade. All photos from Bangkok Gay Festival 2000. by Sylvia Tan.
The unique things about Thailand were (a) the niche for transgender kathoey in the entertainment and beauty industries, and (b) the roughly one hundred gay bars, saunas, massage parlors, restaurants and discos in Bangkok. It was these two factors that came together in 1999. Pakorn Pimpton, a dancer and drag performer, involved with one of the major entertainment companies, was the individual who put the cabaret performers together with the bar owners to back a parade that was a public party, not a political statement.

Longtime activist Natee, who had no role in planning the parade, rushed in at the last moment. He put his activist banner at the very front of the parade, claiming that right on the basis of his pioneering anti-AIDS organisation, known as FACT. Tang, of Angaree, the pioneering lesbian organisation, had t-shirts printed up renaming the event the “Gay and Lesbian” festival, and sold them on the margins of the parade. They had, in fact, been ignored in the planning, but claimed a space anyway.

Who was in the parade? The cabaret kathoeys and the bar boys. The gay business owners sponsored floats and had their sex workers on show. The business owners saw the parade as a way of drawing in more gay tourists, and, in 1999, that seemed to work. I remember well the crowds of gays on Silom near Soi 4, there to see the parade. Many had come up from the AIDS conference in Kuala Lumpur to have some fun in Bangkok and see the parade.

The commercial interests of the business owners and the partying agenda of Pakorn diverged. The business owners took over and pushed Pakorn out of the leadership. The “gay festival” was renamed “Bangkok Pride.” Business owners in Pattaya and Phuket thought there was money to be made, and started their own parades and festivals.

Many of Bangkok's gay business owners sponsored floats and had their workers march in the parade along Silom Roads.
After a number of years the Bangkok Pride board developed its personality clashes, and faced declining support from businesses and the few NGOs involved. Eventually the main business figures withdrew in favor of the Thai NGOs. But the Thai NGOs had never been the people pushing the parties and the parade. The last parade was held in 2006.

The Pattaya parade was completely different, and quite strange. There already was a Pattaya parade on world AIDS Day, December 1st. School children put together anti-AIDS floats, and were judged by a panel of teachers and officials. The gay parade was piggy-backed on the AIDS parade. After all the grim floats came dancing bar boys.

I am not sure when this ended, but there has probably been no parade for three years. Pattaya Pride was exclusively organised by expatriate gay businessmen. A number of parties and events continue to be held every year, packaged as the Pattaya Gay Festival (PGF). Instead of an AIDS day march, last year saw a Mr PGF contest at the biggest go-go bar on December 1st.

Phuket pride was also exclusively run by gay businesses, but there they seemed to be exclusively Thai. That parade and ‘festival’ is now history.

For business owners it is easier to organise some street parties and ‘handsome man’ contests. Those events are closely linked to the gay bars and provide some buzz for tourists. The parades, after the first year, probably drew few new tourists to the gay scene.

The Chiang Mai story, clearly, is totally different. A small pride parade was held in Chiang Mai in January, 2008, without advance publicity or media coverage. It was part of the Asian regional conference of the International Lesbian and Gay Association (ILGA).

The local organisations supporting the conference and parade were the main gay-run AIDS organisations - Rainbow Sky and M-Plus. So the parade was NGO driven from the beginning, like the parades in the Philippines.

The attempt to hold a second Chiang Mai parade in January, 2009, was blocked by ‘red shirt’ political activists loyal to ousted Prime Minister Thaksin. The red shirts claimed to be defending traditional Lanna (Northern Thai) culture. Police did not interfere, though the Red Shirts physically confined the would-be marchers to prevent the parade from happening.

Natee, the pioneer activist, lives in Chiang Mai. Just like 1999, the organisers had ignored him. Instead of inviting himself into the parade (as in 1999), he publicly opposed the parade - angering other activists.

NGOs in Bangkok held a “Sexual Diversity Day” in November, 2008, with rainbow umbrellas (covered in a previous Fridae story 'Thailand holds first sexual diversity day', see below). Here again we have an NGO backed event, without sponsorship from gay businesses. At this point no one knows if it will become an annual event.

Douglas Sanders is a retired Canadian law professor living in Bangkok. He can be contacted at sanders_gwb @ yahoo.ca.
bangkok, pride, parade, march
Thailand