HIV is no longer seen as a death sentence but as chronic and manageable disease. But the cost of taking the life-saving drugs is more than a financial one, says SL Yang who recalls having to battle the side effects and stick to a strict regimen of over 20 pills a day in the earlier days.

It is a known fact that HIV is not a curable disease. Patients who go on medication have to take it for the rest of their lives in order to suppress the virus in the body, preventing it from further weakening the immune system.

In the early days of the epidemic, not much was known about the virus itself – and more importantly, there was no medication available. Until the mid-1990s, patients had no viable treatment available – and many countless died during this period. By 1995, there seemed to be some light at the end of the tunnel – when protease inhibitors were introduced. A selection of drugs was available to combat the virus – and they were used in combination to help suppress the virus in the body.  Since then, more drugs have become available due to a combination of research and improved technology.

Anti-Retroviral Therapy – or ART, consists of a cocktail of drugs a patient takes each day to stop the virus from replicating in the body. I went on ART when the drugs were made available in Singapore in 1995. ART does not work successfully for an indefinite period. The virus, usually after a few years, will mutate and become resistant to the drugs. That is why monitoring blood levels are so important – if the drugs you are taking start to become less effective, the results will show up in your blood work. And this means you will have to change your drug combination for treatment.

Once ART was introduced, first in the West, the results were dramatic. People stopped dying – and got healthier… hospices that were previously full were now empty. Many patients got well enough to go back to work and live fairly normal lives. HIV slowly morphed from a death sentence into a disease that could be chronically managed.

The days when HIV patients were pictured as gaunt and dying are no more. But in place of this is a picture of complacency – many think that HIV patients can now take their medication and everything will be fine. But there is more to this picture.

In those days, I used to take a combination of three kinds of drugs – and I had to faithfully take them three times a day. If I did not – and do not – adhere to this strict regimen, the likelihood for drug resistance would increase. I tried counting the number of pills I had to take once – and stopped counting after I reached 20. Some pills were as big as a fifty-cent coin and I would have to swallow a handful of these each time. Gagging on these pills was not uncommon.

Whenever I had to take my mid-day batch of pills, I had to sneak off to the rest room to swallow them.

In addition to developing the discipline to stick to your drug regimen every day – there were the side effects, which affected different patients in different ways.

I remember getting diarrhoea each time I took a certain type of drug. Thankfully my body got used to it – but only after two months. Another one gave me nausea after awhile – I would suffer from dry heaving for no reason – and I had to eventually forsake it and switch to another drug. There is a limited choice of drugs available for treatment – so each time you get drug resistance, it means there is one drug less you can use – and eventually there won’t be any more available to treat you. That is the reality I have to live with each day. 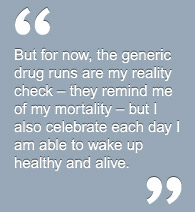 As if it’s not enough bearing the physical burden of this disease – in addition to an emotional one… A third burden – and this can sometimes mean life or death, is a financial one. At one time, I was paying close to S$1,500 (US$1,026) a month for these life-saving drugs. And during a period when I was not working, I still had to fork out the money for these drugs. There were times when my family pitched in to help me pay for those medications.

I have seen cases where a family – husband, wife and two children – were all infected. They could not afford treatment for all, only for two. The parents had to make the heartbreaking decision on who in the family the family would get treatment, and who would be denied it. It is times like these when I think: “Life sucks”. No one should have to make that kind of horrible choice.

Till today, Singapore does not provide subsidies for medication for these life-saving drugs. Fortunately, there are now affordable alternatives for patients here – in the form of generic drugs produced elsewhere.

Governments in Brazil and Thailand produce ART drugs for their own people. Private companies in India are also producing generic drugs. The contentious issue of Intellectual Property Rights claimed by the pharmaceutical companies have kept prices very high – and ART drugs were largely unaffordable by more than 90% of the world’s HIV population in the 1990s. But with World Trade Organisation (WTO) negotiations and the global manufacture of generic ART drugs, millions are now getting treatment – including the hundreds of patients who would otherwise not have been able to afford it in Singapore.

I am profoundly grateful to the Kingdom of Thailand – the government there produce their own generic drugs and even innovated the three-in-one pill – including three ART drugs combined into one single tablet to be taken twice a day.

I travel regularly to Thailand to buy these generic, life-saving drugs. These have been keeping me alive for the past few years… and I know many more Singaporeans who also take these generic drugs. Every time I make my drug pilgrimages to the Land of Smiles, I am humbled.

But for now, the generic drug runs are my reality check – they remind me of my mortality – but I also celebrate each day I am able to wake up healthy and alive.

This is the third installment of a 6-part series which will run every other Friday.
hiv/aids