Bored or tired of the same old 'scene'? You could just be entering 'post-gay' territory... as Nicholas Deroose, a Singaporean student in the US, has come to feel as a totally out person who "no longer wants to identify with mainstream gay culture." 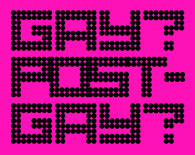 The friend that I had come out here with was at the bar chatting with some other guy while I sat at the opposite end on the couch. I have school tomorrow but here I am at the bar. It’s not that I did not want to go out. I wanted to come to have a drink. I was stressed out by mid-terms/ overseas studies application/ upcoming talk discussion/ badminton planning/ arranging school fees/ whatever else there was to deal with and I needed a break. All I wanted a glass of wine and the company of a friend.

As I emptied my glass and looked around my surroundings I began to feel a certain sense of jadedness hardening over myself. The tacky sliver beaded curtain, the thumping music, the low lighting, it all suddenly began to feel foreign. It was at that point that two thoughts flashed across my mind.

Have we allowed our gay culture to define us or are we defining our culture?

And what does being gay in America mean?

I’d never really thought about it because part of me naively believes that being gay is universal and that regardless of the culture we come from we are able to identify with each other through our struggles. And that is not totally untrue because our struggles do carry a universal message of acceptance but however, culture does play a part.

In these pass two years, I have been very fortunate to be able to assimilate into American gay culture so quickly but part of me wants to say it’s because I have no noticeable accent and am adaptable. I believe that things would have been different if English was not my native language. Would I still be able to identify with the gay community here if I did not speak English?

I am bi-racial. I grew up in Singapore; my father is Belgian and my mother Chinese but I identify ethnically as Asian. If I did not tell people I am Asian, I could probably pass off as Latino because of my tanned skin and slightly Caucasian features. Flipping through the gay newspaper or magazines, I didn’t identify with any of those people. I kept thinking to myself, where are all the Asian faces? Are there no gay Asian Americans?

The thumping of the music overhead was getting too much; I needed to leave soon before my head would burst. I love dance music but when was the last time you heard slow soothing music in a bar? Is “bass” all we listen too? I believe that our musical taste are much more diversity, so why isn’t it reflected in our culture?

I wanted to come out for a quiet drink to de-stress and have a conversation. But the loudness of the music makes it hard to do so; maybe I shouldn’t have come to a gay bar. My friend R even commented on my dress code of sweat pants and a tee. I forget that a gay bar is a place you come to get seen and be seen. Not a place you come to be yourself.

Have I become post-gay? 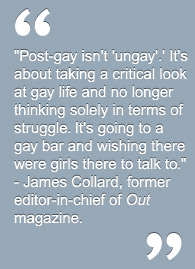 Post-gay: The state in which gay people no longer want to identify with their mainstream gay culture.

Have I reached a point where I no longer see sexuality as a dominant part of my identity? It can’t be that way, because I am still very much involved in the community and am passionate about the issues facing the LGBT community, or am I confusing both? Right now, its 12.22am so it may be the wine talking here.

I came out when I was 17. I did so because I no longer could deal with the lies anymore and when I did I felt like I was born again and that a part of me that I have repressed for so long was now released. I wanted to find out everything that had to do with being gay and I plunged into gay culture in order to do so. Being Gay was me.

I came out when I was 17. I did so because I no longer could deal with the lies and when I did, I felt like I was born again and that a part of me that I have repressed for so long was released. I wanted to find out everything that had to do with being gay and I plunged into 'gay culture' in order to do so. Being Gay was me.

I became fiercely passionate, speaking up on issues of discrimination and advocating the need to speak up and become a ‘voice’ in a climate of silence and fear. Along the way, I also encountered the ‘norms’ of gay culture.

Do we see people who have just come out doe-eyed and innocent? Still clinging onto the idea of true love? That those who have been out for a longer period of time are conscious of the ‘reality’ that true love does not exist within gay relationships? That we all travel on the same progressive path of break ups and open relationships?

These questions stem from the experience of having been in a community that only existed within the confines of the clubs and only wanting to be gay within the clubs. It is this narrow view of the community and the overwhelming negative examples that we surround ourselves with that perpetuates a certain cynical nature that grows to become part of a mentality of have been out for a longer time than others.

Sometimes I think the reason why we always lament that the LGBT community is so small is because we are not considering everybody and that we have become exclusive. What about the people that don’t club? Who are physically challenged? Who aren’t fashion conscious?

I suppose the real question I have to continue to ask myself is: If I know now that I am gay, what does being gay mean and how do I continue to fit in?

Nicholas Deroose, 24, is a student in Philadelphia, Pennsylvania, US and the co-founder of Queercast, Singapore’s only queer podcast.