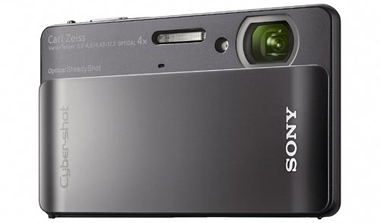 The rugged point-and-shoot segment was predominantly Olympus' game two years ago. But since last year, more manufacturers have dished out their own tough shooters. Notably, it was Panasonic which proved to be most aggressive--the recently announced Lumix DMC-FT2 had hardy specifications closest to Olympus' flagship Mju Tough-8010. While Canon and Fujifilm did release almost similar offerings, they just weren't as robust as the Panasonic or Olympus. Now, this market is seeing a new contender from Sony which has unveiled the Cyber-shot DSC-TX5, a sleek touchscreen-enabled point-and-shoot which may be able to take almost anything you hurl at it.

One of the TX5's highlights is its design. Measuring just 17.7mm thin, the Cyber-shot is touted by Sony to be the world's slimmest rugged compact. Like other T-series cameras, the TX5 has a sliding lens cover which reminds us of the Olympus Mju 1050 SW announced two years ago.

The TX5 employs a 10.2-megapixel backlit sensor which gives the point-and-shoot more features than other similar snappers. For example, users can shoot 10 frames per second at full resolution or capture panoramic shots underwater. Such specifications were previously unavailable for rugged cameras, though Olympus did offer a similar panoramic mode but its operation was less intuitive and the image capture resolution was lower.