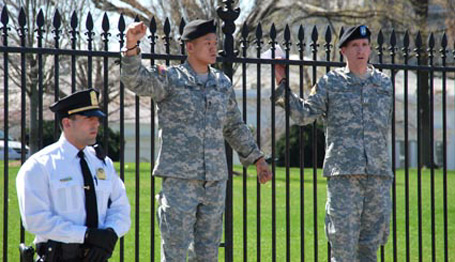 Lt. Dan Choi, a DADT activist and Iraq combat veteran who faces being discharged from the Army for being openly gay, was arrested last week after handcuffing himself to the White House fence in protest of Don't Ask, Don't Tell. He tells Newsweek he feels “so betrayed” by the largest gay rights advocacy group in the US.

Lt. Dan Choi, was arrested last Thursday along with former Army captain Jim Pietrangelo II, and lesbian activist Robin McGehee. Both men are openly gay and are involved in legal fights with the Department of Defense over efforts to discharge them for homosexuality.

Dressed in their uniforms, Choi and Pietrangelo handcuffed themselves to the White House fence in protest of Don't Ask, Don't Tell with the help of McGehee, a former Parent-Teacher Association (PTA) president turned activist who last week cofounded GetEQUAL, an LGBT activism group inspired by civil-rights organisations and gains made through civil disobedience. The group is focused on ending "don’t ask, don’t tell" and for House Speaker Nancy Pelosi to bring the Employment Non-Discrimination Act (ENDA) to a vote on the US House floor.

Choi and Pietrangelo spent one night in jail. Both men have declined to pay a US$100 fine and walk away with no admission of guilt, instead pleading not guilty to the charge of failing to obey a lawful order and are preparing to stand trial. A trial date is set for April 26.

Choi, an Army Arabic translator and a prominent advocate against Don't Ask, Don't Tell – a 17-year ban against openly gay service members - and founder of the West Point GLBT group Knights Out gave Newsweek his first interview after the arrest and spoke about personal sacrifices in the fight for LGBT equality, feeling “betrayed” by the Human Rights Campaign (HRC) – the largest gay rights advocacy group in the US and a “deep schism” in the gay-rights movement in the US.

Choi on making personal sacrifices and elitism in among gay rights groups:

“Within the gay community so many leaders want acceptance from polite society. I think there's been a betrayal of what is down inside of us in order to achieve what looks popular, what look enviable. The movement seems to be centered around how to become an elite. There is a deep schism [in the gay-rights movement], everyone knows this. But this shouldn't be about which group has better branding. There is a tremor right now in every gay and transgender youth that these groups are not grasping. I would say to them—you do not represent us if all you are looking for is a ladder in to elite society.

“When I get messages from people who want to be a part of this I ask back: what are you willing to sacrifice? We are tired of being stereotyped as privileged, bourgeois elites. Is someone willing to give up their career, their relationships with powerful people, their Rolodex, or their parents' love to stand up for who they are? I'm giving up my military rank, my unit – which to me is a family – my veterans' benefits, my health care, so what are you willing to sacrifice?”

On comedienne Kathy Griffin being a questionable choice as a spokesperson:

“Because you get tired of talking. [Over the past two years] I've done 50 live interviews, a hundred other interviews, how much more talk am I expected to produce? When I heard Kathy Griffin was going to be a spokeswoman for Don't Ask, Don't Tell, I wondered about that. I have great respect for her as an advocate. But if [the Human Rights Campaign] thinks that having a rally at Freedom Plaza with a comedienne is the right approach, I have to wonder. Don't Ask, Don't Tell is not a joking matter to me. To be at Freedom Plaza and not at the White House or Congress? Who are they trying to influence? I felt like they were just trying to speak to themselves. If that's the best the lobbying groups and HRC can do, then I don't know how these powerful groups are supposed to represent our community. Kathy Griffin and [HRC president] Jay Solmonese said they would march with me to the White House but didn’t. I feel so betrayed by them.”

"When you get arrested, it's difficult because your hands are restrained, and the movement is a little bit stymied or halted on the physical level. But it's my hope that the larger movement, even with the chains on, can do nothing but grow to the point where it cannot be controlled by anything but that freeing and that dignified expression of getting arrested for what you know is absolutely morally right. There was no freer moment than being in that prison. It was freeing for me, and I thought of all of the other people that were still trapped - that were still handcuffed and fettered in their hearts. And we might have been caged up physically, but the message was very clear to all of the people who think that equality can be purchased with a donation, or with a cocktail party, or with tokens, that are serving in a public role. We are worth more than tokens. We have absolute value. And when the person who is oppressed by his own country wants to find out how to get that dignity back – being chained up and being arrested – that's how you get your dignity conferred back upon you. And so I think that by actions, my call is to every leader - not just talking gay leaders - I'm talking any leader who believes in America, and the promises of America can be manifest. We're gonna do it again. And we're going to keep doing it until the promises are manifest. And we will not stop. This is a very clear message to President Obama and any other leader who supposes to talk for the American promise and the American people. We will not go away."

The Edge Boston reported that although Choi had not been scheduled as a speaker at the Human Rights Campaign’s March 18 rally at Freedom Plaza against the ban, he requested and was granted a spot to address the crowd.

Choi took the mike from comedian and rally speaker Kathy Griffin: "You’re great at telling jokes, but let me make one thing very clear: this is not a joke. Don’t Ask, Don’t Tell is not a joking matter. It is the only law that enforces shame."

He added that it would have been “easy to stay quiet” after he was welcomed back to his unit but it constitutes "a dereliction of duty, and it is a dereliction of my moral code and my moral fiber.”

He extended an invitation to president of the HRC, Joe Solmonese, to openly gay war hero Eric Alva, also a leading proponent of rescinding the ban, and to Griffin, who shouted "Of course!" to go with him to the White House. Choi and a crowd of about 100 people proceeded to the White House, where Choi and Pietrangelo were reportedly assisted in handcuffing themselves to the fence. But neither Solmonese nor Griffin went with him.