Most of the conference's participants left their hotel the same night after dozens of protesters from hardline Islamic groups staked out the hotel and conference venue for hours on Friday. Sylvia Tan reports from Surabaya.

Today, March 26, was to be the start of the fourth regional conference of the Asia chapter of the International Lesbian, Gay, Bisexual, Transgender and Intersex Association (ILGA). The conference had however already run into problems on Tuesday after news of it made the front page of a local newspaper.

The local media had widely reported that the police had refused to issue permits after hardline Islamic organisations vehemently denounced the conference and vowed to ensure the event was truly cancelled, the Jakarta Globe reported. Surabaya is the capital of East Java province and Indonesia's second-largest city.

An estimated 50 to 60 members of conservative Indonesian Islamic groups on Friday arrived at the hotel where many conference participants were staying. Organisers had earlier announced that the conference, which was to be held at the Mercure hotel Friday through Sunday, has been officially cancelled although informal meetings were held on Friday morning in several guestrooms at Oval hotel. Many conference participants who were supposed to stay at the Mercure were transferred to Oval hotel after a 20-strong crowd had protested outside the Mercure on Thursday. 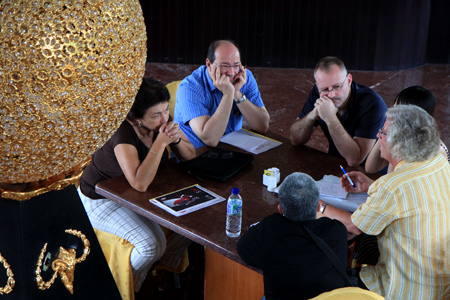 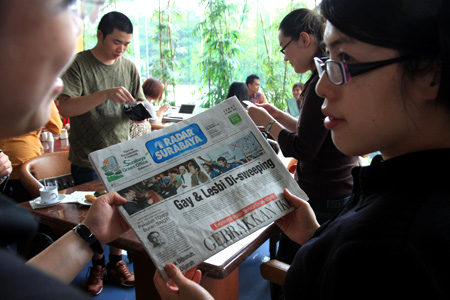 Conference participants, who were in the middle of lunch in the hotel lobby at about 1pm on Friday, were abruptly told by organisers to return to their rooms as they had received word that protesters were on their way to the hotel. 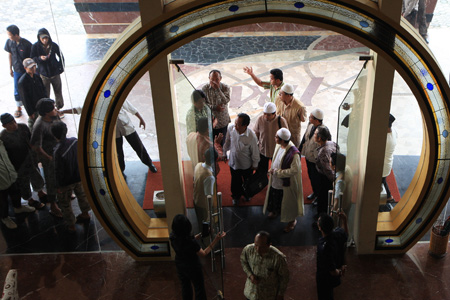 Members of various radical groups arriving at Oval hotel at 1.20pm.
All photos by Sylvia Tan.

Shortly after, about two dozen men arrived at the hotel in several minivans. A number of them waited outside the main entrance while others who appeared to be the leaders of the protesting groups came into the hotel and were received in the lobby as staff laid out two rows of chairs. 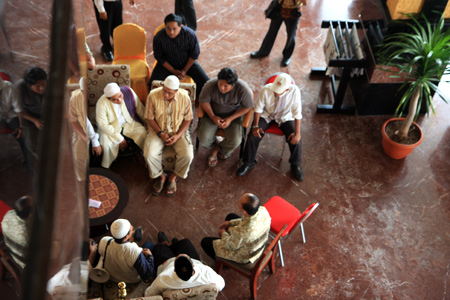 According to local sources, the men are believed to be from conservative and hard-line Islamic groups including the Indonesian Council of Ulemas (MUI), Indonesia's top Muslim clerical body; Islamic Defender Front (FPI), a local extremist group that is known for violent tactics; and the Hizb ut-Tahrir Indonesia (HTI), a local chapter of a worldwide network of the same name that is believed to be very active in a number of countries including the United Kingdom despite being banned by many governments.

Conference participants were strongly advised by organisers to remain in their rooms as members of the hardline groups were in the lobby and said to be walking along the hotel corridors. 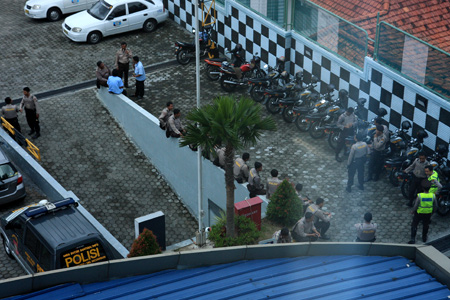 Police outside the hotel at 3.25pm. All photos by Sylvia Tan. 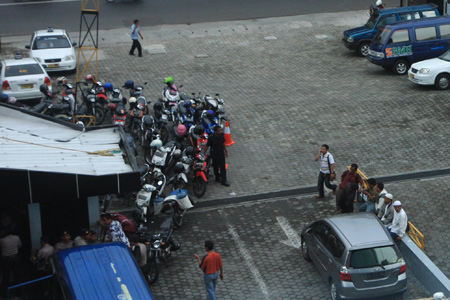 At about 5.40pm, from the window of a third floor room which overlooked the hotel’s main entrance, several other participants counted some 30 motorcycles that had trickled into the hotel’s carpark in the past four hours. At about the same time, the Islamic call to prayer was clearly audible from a nearby mosque.

At about 7pm, organisers gathered participants in a room and said that they had received information that not only would protesters return in greater numbers the next morning but they might be armed. 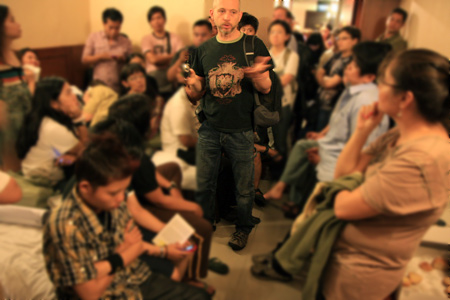 A group meeting to discuss options; centre: Joel Bedos,
Secretary-General, International Day Against Homophobia and Transphobia.
This image has been intentionally blurred to protect the identity of local participants.

The hardline groups had not only demanded for the conference to be cancelled but for attendees to leave the country.

A participant who was outside the hotel reported seeing at least dozens of protesters three blocks away from the hotel at 5pm.

At about 8pm, the number of protesters outside the hotel had thinned considerably and by 10.30pm, at least half of the estimated 80 or so participants had left the hotel with all their personal belongings.

There were conflicting reports as to whether the police was willing to guarantee the safety of the participants should they remain in the hotel as some local activists shared that it was not beyond members of radical groups to conduct “raids” of hotel rooms as it had occurred in another city. 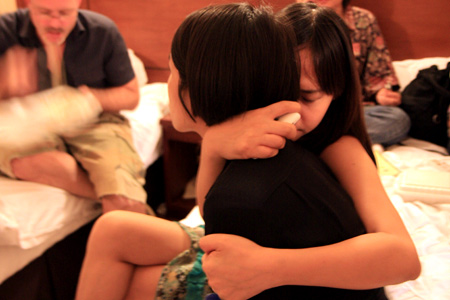 Sass Sasot (Manila, Philippines) with Eva Lee (Beijing, China) who's
taking a breather after having spent the last hour going door to door
to inform participants of the latest developments. All photos by Sylvia Tan.

Poedjianti Tan, the head organiser from Surabaya-based Gaya Nusantara, the longest-running gay rights advocacy group in the country and host of the conference told Fridae that she did not expect the situation to unfold the way it did.

“I’m very shocked,” she paused as she regained her breath after having been juggling calls on her mobile phone and the room phone non-stop for several hours as her colleagues and her worked to find participants alternative accommodation for the night and secure transportation while negotiating with the police.

She said that the police had already given their approval for the conference to be held however the document bore the wrong date. The document was to be amended by the police and collected early in the week but before they could do it news of the conference made the front-page of a local newspaper on Tuesday.

“The problem is the newspaper articles,” she said. Surabaya as she knows it has been tolerant of LGBT-related issues and events. The city has seen three annual International Day Against Homophobia and Transphobia events with the last being held in a public park with entertainment provided by gay and transgendered performers. The Q(ueer) Film Festival had also toured Surabaya annually since 2007 holding screenings of LGBT-themed films at public cinemas without incident.

Although Indonesia has the world's largest Muslim population, it is a secular state and homosexual acts are not punishable by law.

The reporter's stay was sponsored by the Mercure Surabaya.