Hong Kong IDAHO: Day against homophobia and transphobia, May 17

No doubt prompted by the many sad developments this year in various parts of the world, the international organisers of the International Day Against Homophobia and Transphobia (IDAHO) have chosen the theme of ‘Religions, Homophobia and Transphobia’ for this year’s commemoration on 17 May. The last year has seen some disturbing cases of the continued efforts by religious fundamentalists in places as far apart as the US, Africa and Indonesia to marginalise and in some cases to persecute queer people. 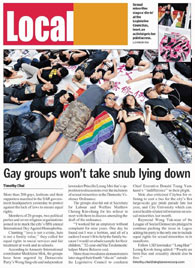 Press coverage in Hong Kong's The Standard of the city's fifth IDAHO event in 2009. Click to see enlarged image and more reports.

California’s Proposition 8 accompanied President Obama into office, to some degree on the backs of the black vote mobilised for him, and again ended same-sex marriage in the state. America’s never-ending culture wars, fuelled almost entirely by the religious right, continue unabated and have spewed their poison into Asia and Africa. Their allies in African churches have been behind moves to persecute gays in Rwanda, in Malawi, in Nigeria and worst of all in Uganda, where a bill has been introduced to make some gay activity a capital offence and to penalise even those who do not turn in to the state their gay family, friends and neighbours. In many Muslim lands, such as Iran and the Arab states across the Gulf, gay people continue to be persecuted and on occasion executed.

In Indonesia, this year’s conference of the ILGA in Surabaya was disrupted then closed this March due to Islamic militant intimidation. Most recent of all, the anti-gay conservative alliance in the Anglican Church, Global South, met in Singapore and appointed that state’s Anglican Archbishop, John Chew, to be their chairman. It has been a more than usually dismal year in terms of religious actions against LGBT people all over the world.

We have also been reminded this year, though, that not all religions seek to stigmatise and harass the queer community and that there is another side to the religious coin. The US Episcopal Church in Los Angeles has ended Bishop Gene Robinson of New Hampshire’s lonely tenure by electing a lesbian bishop, Mary Glasspool. Fridae.com recently examined the growing role of the Blessed Christian Minority Christian Fellowship in caring for Hong Kong’s Christians. Sympathetic clergy of all religions continue to work all over the world for the good of their queer adherents. So whilst IDAHO 2010 will no doubt concentrate on the suffering caused by religious extremists, it will also note that many religious moderates and liberals are involved in the fight for LGBT rights. The events of 17 May will include some recognition of this, too. 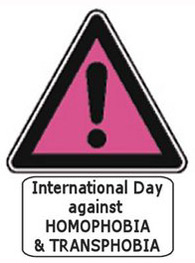 For updates, visit the IDAHO Hong Kong Facebook page on which you can sign up as a 'friend.'

In Hong Kong, this year’s commemoration will take the form of a candlelight vigil right in Chater Gardens in the heart of the city on the evening of IDAHO itself, Monday 17 May. As darkness falls in Hong Kong, candles will be lit to commemorate the victims of transphobia and homophobia throughout the world. There will be a display of cases of oppression shown throughout the ceremony, which will be accompanied by some form of demonstration of anger on behalf of the victims and a minute’s silence to remember them. Hong Kong’s IDAHO has traditionally had a ‘die-in’, and this will be continued this year, and the evening will include speeches by guests and representatives of the organisations taking part. The event will close around 9pm. Chater Gardens has been chosen as the location this year as it is next to the Legislative Council Building (the opposite side from Statue Square) and as it will provide the maximum publicity for the event. Large media coverage is expected.

The Hong Kong tongzhi groups involved are slightly different this year. In the past, Women Coalition of Hong Kong, Midnight Blue and the Hong Kong Ten Percent Club have taken the lead in the IDAHO Organising Committee, but these three organisations have taken a rest this year to concentrate on their work in the community. Mainstay of this year’s Committee is still Rainbow of Hong Kong, which is providing many of the volunteers and the event’s MC, Jimmy Sham. The programmer this year is Francis Tang of the newly formed gay men’s community group, Gay Harmony, and the Committee is headed up by Reggie Ho of HORIZONS. Other contributing organisations this year are Amnesty International’s LGBT Group, the Association for the Advancement of Feminism, the youth group Elements, Unitarian Universalists Hong Kong and several members of the Tongzhi Community Joint Meeting (TCJM), including Barry Lee, the Committee’s Treasurer and this reporter, who is its English Secretary. There are three local tongzhi media partners: Brian Leung’s RTHK programme ‘We Are Family’ and his net site GayStation.hk; Green Radio Y Talk; and GDotTV.

The cost of the event will be born by subscriptions, which will cover the loud speaker and display systems and their power supply, the provision of candles and lighters, and insurance for the event. There is no charitable or other funding available currently for this event, so the Committee is looking hard for help. The TCJM has opened a column in its bank account for the event; anyone wishing to subscribe should remit money to the following account, also sending an email to let the Treasurer know at tcjmhk@gmail.com: