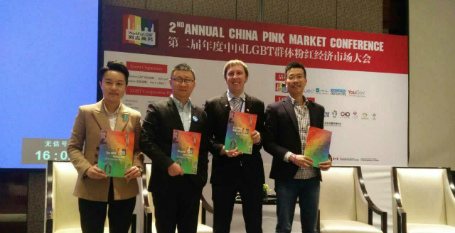 WorkForLGBT, leading a coalition including YouGov, Dan Lan / Blued, the L, and Weber Shandwick, and supported by more than 20 LGBT partners across China, held the 2nd Annual China Pink Market Conference on Monday.

It was both an LGBT community as well as consumer behavior survey to better understand the status quo for LGBT people in China today and better serve the future development of this community.

The survey was completed in late September and released as the 2015 China LGBT Community Report at the 2nd Annual China Pink Market Conference November 9th; providing an authoritative guide for companies wishing to explore the LGBT Pink Market in China and understand the latest in domestic developments.

The China LGBT Community Survey was first conducted in 2014, where it was widely hailed by the business community as the most comprehensive and methodical study of the LGBT community in China and their consumer behavior ever conducted. In 2015, survey parameters were adjusted for even more strict analysis, accuracy, and extrapolation. The 2014 China LGBT Community Survey collected responses from more than 8,000 LGBT Chinese survey takers.

WorkForLGBT founder Steven Paul Bielinski, lead organizer of the project, said "over the past year, Chinese domestic firms have started advertising and reaching out through social media to LGBT people for the first time as customers; expressing support for LGBT diversity and inclusion. Companies here are starting to realize the importance of LGBT diversity in their recruiting and retention of talent. China has tens of millions of LGBT consumers"

The leading gay mobile app globally, Blued today has more than 15 million users. As organizing partner for the conference, Dan Lan/Blued's CEO Geng Le stated, "in China today, there are more than 70 million LGBT Chinese, equivalent to the entire population of the UK or the population of Beijing, Shanghai, Guangzhou, and Shenzhen combined."

Many Chinese companies for the first time started advertising towards LGBT consumers, and the concept of a "Pink Market" truly began to become popular and accepted in China."

A record breaking survey of 18,647 qualified and completed individual responses from the LGBT community in China makes the report the largest LGBT exclusive country survey ever conducted.

That said, the number claiming to be doing poorly financially also rose, up to 29% from 21% last year. It seems volatility in the economy is also affecting the LGBT community.

Despite nearly half of LGBT people hoping to get married one day to someone of the same gender, and only 1 out of 5 preferring to be single (with just 5% claiming a "marriage of convenience" as their ideal, more than 50% of LGBT Chinese are single

With same sex marriage being legalized nationally in the US, and increasing overseas travel, it is not surprising that the desire for overseas same sex marriage is extremely high at 70%. There is also significant interest in overseas reproductive surrogacy services, at about 30% of the LGBT population in China.

Over the next 5 years, one out of three LGBT Chinese plan to "come out" to more people, while nearly half remain undecided, and one out of four have no plans to reveal their identity. This signifies an enormous growth opportunity for business in China to reach LGBT people.