In a judgment that has taken nearly a year, Tan Eng Hong and his lawyer M Ravi are now one step closer to challenging the constitutionality of section 377A of the Penal Code that prohibits sexual relations between men.

Singapore’s Court of Appeal today overturned High Court judge Lai Siu Chiu’s decision on 15 March 2011 when she ruled that there was no "real controversy" which required the court’s attention – meaning that it was not a matter of importance to be decided by a court. 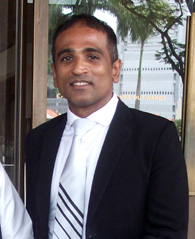 However at the time she agreed that Tan did have locus standi – meaning he is affected by this law to have a legitimate interest or standing in the issue.

The challenge was filed by Tan, who was first charged under section 377A for having oral sex with another consenting male in a public toilet in a shopping mall. On 24 September 2010, M Ravi, acting for Tan, filed an Originating Summons challenging the constitutionality of this law. Mid-October, the Attorney-General’s Chambers (AGC) withdrew the 377A charges, substituting charges under Section 294 (obscene act in public) instead. Tan was later fined S$3,000 for committing an obscene act in public.

In a 102-page judgment released today, the bench comprising Judges of Appeal Andrew Phang, V K Rajah and Judith Prakesh, said that as the current law extends to private consensual sexual conduct between adult males, it "affects the lives of a not insignificant portion of our community in a very real and intimate way".

“We are unable to agree with the AG that violations of constitutional rights only occur when a person is prosecuted under an allegedly unconstitutional law. It is clear that violations of constitutional rights may occur earlier, viz, when an accused is arrested and detained under an allegedly unconstitutional law. When a person is arrested and detained, he is deprived of his Art 9(1) right to personal liberty. However, if such deprivation is done "in accordance with law”, there is no breach of Art 9(1). For ease of reading, Art 9(1) is reproduced as follows: No person shall be deprived of his life or personal liberty save in accordance with law. [emphasis added].” (Page 81)

The court says it affirmed Tan to have standing and it found of the existence of a real controversy to be determined in this case arising from a combination of two factors: Tan was at the outset arrested, investigated, detained and charged exclusively under s 377A and secondly, there's a real and credible threat of prosecution under s 377A.

In conclusion, the court said in the judgment: "We thus allow the present appeal and grant Tan leave to amend the Application to include a prayer that he ought not to have been arrested, investigated, detained and charged under s 377A as well as to make the appropriate references to Art 162 for the sake of completeness. We hold that Tan has standing to pursue his claim for declaratory relief subject to the requisite amendments to the Application being made. For the avoidance of any doubt, we reiterate (see also above at, inter alia; [3] and [127]) that we are not deciding here that s 377A is inconsistent with Art 12 as that goes to the merits of the Application. We are merely deciding that it is arguably so, which suffices for the present appeal on the preliminary issue of whether the Application should be struck out.” (Page 101)

The judgment also noted the difference between "no proactive enforcement" and "no enforcement" as the government declared in October 2007 that Section 377A will not be "proactively enforced". It further declared the constitutionality or otherwise of s 377A to be of real public interest and that the "continued existence of s 377A in our statute books causes them (gay men) to be unapprehended felons in the privacy of their homes.

M Ravi told Fridae he hopes for the case to be remitted to the High Court for a "full-blown battle to knock out section 337A." He will write to the court for a date to be fixed.

Extracts from the judgment:

Is there a real and credible threat of prosecution under s 377A?

180 There have been ministerial statements in Parliament indicating that the Government's policy towards s 377A is that this provision will not be "proactively" enforced (see Singapore Parliamentary Debates, Official Report (23 October 2007) vel 83 at col 2401; see also Singapore Parliamentary Debates, Official Report (21 July 2008) '101 84 at col 2923). However, "no proactive enforcement" is, in our view, of a totally different complexion from "no proactive enforcement" and "no enforcement". No Minister has gone so far as to state that there will be no enforcement of s 377A. The phrases "active"/"proactive"/"vigorous” enforcement are broad phrases which can comfortably bear a spectrum of meaning. At one end of the spectrum, the lack of active enforcement may suggest that the police will not charge consenting adult males who engage in homosexual activities in private, whatever the circumstances. At the other end, it may simply mean that the police will not purposely seek out adult males who carry out such activities with a view to charging them, but if they happen to come across such activities being committed or if they receive complaints of such activities, they will then arrest and charge the relevant persons under s 377A. One can conceive of a situation where a neighbour of a homosexual couple calls the police to lodge a complaint that offences under s 377A are being committed in the privacy of that couple's home. In such a situation, if the police respond to the call and proceed to arrest and charge the couple under s 377A, would this be "active" enforcement, or "reactive" enforcement? If it is the latter, it will not be covered by the statements in Parliament.

182 Further, there is nothing to suggest that the policy of the Government on s 377A will not be subject to change. Just as the AG cannot fetter his discretion on policy matters) the Executive cannot fetter its discretion on the same. Ministerial statements in Parliament on policy matters do not invariably bind a future or even the same government. The Executive's discretion to determine policy remains unfettered and it has the right to change its policy with regard to the enforcement of s 377A. Therefore, as long as s 377A remains in the statute books, the threat of prosecution under this section persists, as the facts of this case amply illustrate.

183 We also find that the threat of prosecution under s 377A is not merely fanciful, even for the type of conduct that Tan professes to regularly participate, in namely, private consensual sexual acts between two adult males. As noted earlier at [173] above, stern warnings have been issued by the police under s 377A for such conduct. As stern warnings are only issued after investigations have been carried out with regard to the offence in question, the individuals who have received stem warnings under s 377A would have been arrested and detained under an arguably unconstitutional law. When Mr Abdullah [Mr Aedit bin Abdullah who appeared on behalf of the AG] was asked about the stem warnings issued by the police under s 377A, he stated that there is sometimes a necessity for suspects to be investigated even though their sexual acts seem consensual. This might occur where suspects have been arrested for another criminal offence (eg, drug consumption) and the facts also disclose a possible s 377A offence, In such cases, while the police are aware of the facts giving rise to a possible s 377 A charge, they may decide not to proceed with that charge if the sexual activities were between consenting adult males. We find that the fact that stern warnings have been issued under s 377A for private consensual acts between adult males suggests that there is not just a mere spectre of prosecutions under that provision. A stern warning is a way of informing the individual who is warned that if he continues to indulge in the type of conduct circumscribed by s 377 A, leniency may no longer be forthcoming in future and he may well be charged under s 377A if he is found engaging in such conduct in the future, Further, there is a real possibility that the individual police officer or Deputy Public Prosecutor handling a case may decide not to proceed with a stern warning, but to instead prefer a charge under s 377A. That appears to be precisely what has happened here.

184 Without going into the merits of the Application, we want to acknowledge that in so far as s 377A in its current form extends to private consensual sexual conduct between adult males, this provision affects the lives of a not insignificant portion of our community in a very real and intimate way. Such persons might plausibly assert that the continued existence of s 377A in our statute books causes them to be unapprehended felons in the privacy of their homes. The constitutionality or otherwise of s 377A is thus of real public interest. We also note that s 377A has other effects beyond criminal sanctions. One unwanted effect of s 377A is that it may also make criminals out of victims. We will list three illustrations to highlight this point. First, a Juan who suffers domestic abuse at the hands of his male partner may be reluctant to report it to the police as police investigations may reveal that he (ie, the victim of domestic abuse) is guilty of an offence under s 377A. Second, if a man Vi ho has been sexually assaulted by another man reports this to the police, he may lay himself open to a s 377A charge as s 377 A is silent on consent. While a charge in such a scenario may be unlikely, the fear of being charged may be sufficient to deter some victims from coming forward. Third, lest it is thought that these scenarios are fanciful, we refer to a reported incident where a man who was robbed after having sex with another man reported the theft to the police and received a warning under s 377A (see "This teacher was caught having sex in public, police tells school", The New Paper (21 February 2005)).