Members of the LGBT community in Singapore today expressed their disappointment and outrage over the prime minister's reasoning as to why section 377A of the Penal Code which criminalises gay sex should remain.

Singapore Prime Minister Lee Hsien Loong was quoted by Today newspaper as saying: “Why is that law on the books? Because it’s always been there and I think we just leave it.” 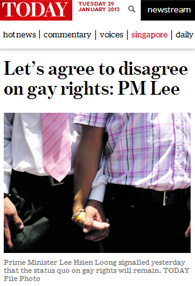 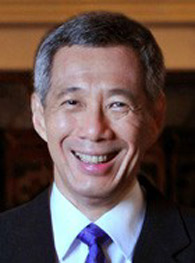 In 2007, he said that the government’s decision to not enforce the law is a "practical arrangement that has evolved out of our historical circumstances" that "reflects the social norms and attitudes." He added: "It's better to accept the legal untidiness and the ambiguity. It works; don't disturb it."

Lee’s latest comments came when he was speaking at the Singapore Perspectives conference organised by the Institute of Policy Studies on Monday. He was asked by a participant how the fact that the Republic is a secular country reconciles with “an old and archaic law that nearly discriminates against a whole (group) of people”.

Calling the repeal of the law a "looming threat to the basic building block (of family) by homosexual activists", two anti-gay pastors in Singapore took to the pulpit earlier this month in an effort to mobilise their members to lobby MPs and the government not to repeal the law. The High Court is scheduled to hear two cases on the constitutionality of section 377A in February and March. On Jan 22, the Attorney-General's Chambers issued a statement to warn the public to refrain from making any comments on the upcoming cases and it could be deemed sub judice.

Today also quoted Lee as saying: “These are not issues that we can settle one way or the other, and it’s really best for us just to leave them be, and just agree to disagree. I think that’s the way Singapore will be for a long time.” He added that the “conservative roots” in society do not want to see the social landscape change.

LGBTs in Singapore including their straight allies have taken to Facebook to speak out against Lee’s position and explanation for supporting the status quo, some of whom wanted to see him exert more moral leadership in favour of gay equality while others pointed out the possibility of his comments being sub judice.

“Is the Prime Minister signalling to the judiciary that S377A should stay on the books? The two constitutional challenges haven't even been heard yet and in light of the recent AGC warning, is the PM guilty of sub judice contempt of court?” Asked Shanghai-based Singaporean Kenneth Tan in a comment posted on the Today article which went viral today.

Alan Seah, a prominent member of the gay community, says that while he agrees with the stance that people with opposing views should sometimes just agree to disagree, it is however “not a solution when the law of the land is weighted against those on one side of the issue.”

“A good analogy would be the issue of whether life begins at conception. Our laws allow for women to have abortions. And society – other than at the extreme fringes – has for the most part agreed to disagree on the issue. But surely that would not be the case if abortions were considered criminal. Then there would surely be an ongoing, passionate 'polarised' fight between opposing groups, with the issue always boiling over. Much as it does on s377A," he told Fridae.

Law student Melissa Tsang likened the PM’s reasoning for keeping the law as: “The majority likes it, so we won't rock the boat."

She told Fridae: “To suggest that we should 'agree to disagree' is easy if the issue here is really just a debate about abstractions. But it's not. It can seem this way to the PM because he gets to walk away from this disagreement with his life untouched by it. We cannot agree to disagree precisely because we are not first equal.”

When contacted, Rev Yap Kim Hao, a gay-affirming retired pastor who is also the first Asian Bishop of The Methodist Church in Malaysian and Singapore from 1968 to 1973, said: “If we are to make progress to a better future we cannot afford to leave things are they are. We live in a situation of constant change and it is imperative for us to engage in serious conversation, to embrace change and to discover new possibilities to benefit all of us.”