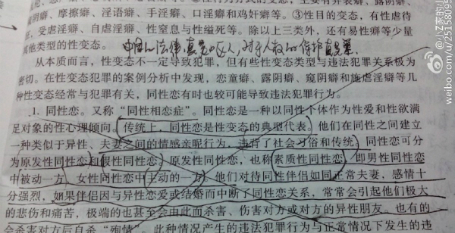 Gay rights activist, Qui Bai, has filed a lawsuit against China's Ministry of Education (MOE) for Chinese textbook descriptions of homosexuality as a psychological disorder.

The 20-year-old lesbian is a third-year student at a university in Guangdong Province.

She said her actions were part of a quest to find out who should take responsibility for physiological and medical text books in the school library that define homosexuality as sexual deviation.

She told the Global Times on Monday that the No.1 Intermediate People's Court in Beijing accepted her case on Friday. She has also complained to the local education bureau and the media watchdog.

"When I was experiencing an identity crisis, I tried to seek help by consulting these textbooks. But the wrong information has hurt me as well as other students like me," Qiu told the Global Times.

In the textbook Consulting Psychology, which was included in Guangdong's 12th Five-Year Plan (2011-15) for college textbooks and published in 2013, homosexuality is defined as a psychological disorder, together with pedophilia, zoophilia and necrophilia.

Homosexuality was officially removed for the Chinese Classification of Mental Disorders in 2001.