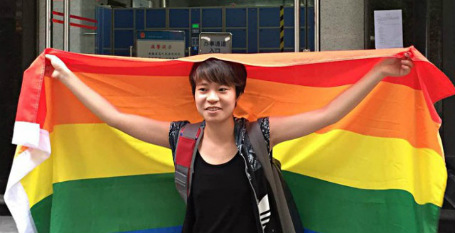 LGBT student activists have met with government officials from the Ministry of Education to remove textbooks which identify homosexuality as a mental disorder.

LGBT activist Chen Qiuyuan has been lobbying the Ministry of Education in Beijing to remove textbooks from schools and universities that classify homosexuality as a mental disorder.

In May Chen, a 20 year old communications major at Sun-Yatsen University, sent a letter to the Ministry of Education, demanding that it disclose its procedure for approving these textbooks.

The Ministry of Education did not respond in the 15 day time limit set by the government. Chen sued the ministry, and on August 14th, her case was accepted by the Beijing No. 1 Court.

In lieu of a trial, Chen had a two hour meeting with education officials, presided over by a judge. Chen’s lawyer made the following statement:

“The people from the Ministry of Education said they had read reports about this case, and they had studied whether or not homosexuality was an illness. They're paying attention to this issue. I think that's good. Only if there's attention on a problem can it be solved.

To be able to go to court, and have the media here report about it, that indicates that this topic is slowly opening up and prejudice can be slowly eradicated.”

Although homosexuality was removed from the list of recognised mental disorders in 2001,a study last year by the Gay and Lesbian Campus Association in China found that out of 31 psychology textbooks that have been published in China since 2001, 13 of them classified homosexuality as a mental disorder.

"What I"m trying to do is eradicate prejudice in society toward [the homosexual community]," Chen told reporters. "It's very difficult to make your parents, that generation, to accept."