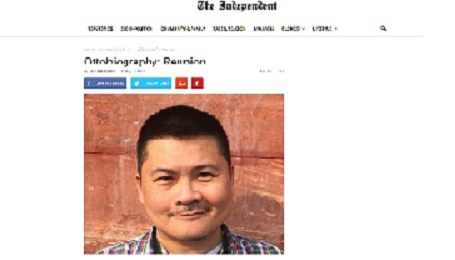 Reunions are a bane for some LGBTs.

“When are you getting married?” “How come still don’t have girlfriend/boyfriend?” “See your cousin now director level already! What about you?” Reunion is about family, and that involves all aspects of family, including the less pleasant but ever present multi-generational sibling rivalries.

While I attended all reunions dutifully, I noticed a conspicuous difference of the reunions before and after my immediate family learnt of my sexuality. When we were young, my parents proudly spoke of our academic and extra-curricular achievements. After I came out, mom and dad continued the narratives of my siblings. Of me, there was no chit-chat about my career. There was no talk about my theatre plays – not the first one which got the first of two R(A) ratings for local Mandarin theatre, nor the other that won an award. If there were, there would be quick detours to other topics. It was as if they were leading friends and relatives through the various rooms in their house, and hastily bypassed the strangely-locked door of a badly-deformed or deranged child.

That year in September, mom and dad got a call from an old friend.

“Your son is in Zaobao,” the friend said, “You better go and read it. Try to stay calm.”

Dad quickly picked up the Chinese morning newspaper. He found an article with my photograph. The title was “RI Teacher Outs Himself In Blog As Gay”.

On a Friday evening, two days before, I had posted a public blog outing myself, and sent the link to the blog to all my colleagues in school. Not surprisingly, the link leaked to the student population and then the rest of Singapore. A teacher outing himself was unthinkable in Singapore, and a teacher from the acknowledged ‘top school’doing that was utter madness.

Soon, the popular gay portal Fridae had reposted the article, and it was translated into a few other languages overseas. Parents, students and the public began reacting to the ‘shocking’ thought that a gay man could be teaching some of the brightest students in the country. The Minister for Education had to convene an emergency meeting over this matter.

When dad called, I was busy with emails from reporters and school. I had to brace myself coming Monday when I went to work as an openly-gay person.

The next few days went as well as I dared hope for. The three RI principals handled it expertly and myself with compassion. I was willing to take down the blog as a gesture of good will (after all it was already featured on various other sites and translated into different languages), but I told them that I would not apologise.

“You can fire me before I apologise,” I said to one principal, “I did nothing wrong.”

With the support of my students, some fantastic and enlightened parents and my colleagues, the situation calmed down smoothly. There were no talks of removing me as a teacher, and I continued to teach while Han picked me up in the evening.

Being openly-gay with boss, colleagues and strangers were unnerving. Facing the whole school at flag-raising as a gay man was stressful – I wore my least favorite shirt in case someone threw an egg at me. But Han knew the hardest encounter would be with my parents.

“Make sure you drive safely!” He urged as I prepared to visit them at the end of the week.

Dad met me at the door, and took me out for a walk.

“Your mom didn’t sleep the whole week,” He said when we were alone downstairs.

I came out and it’s all about them losing sleep? I swallowed my resentment.

“Have you thought about the consequences of your actions?” Dad shot back, raising his voice, “Things have been going so well for you! You could have such a great teaching career, and still lived your life quietly!”

“It’s not the same thing!” He countered, referring to the workers’ strike for better working conditions before Singapore’s Independence, “We were starving! We were paid very little and worked very long hours for the employers. We had little savings and no hope of a better future for our children!”

“Money isn’t everything,” I said, “My friends and I are living in lies. We can’t bring our lovers home. We had no support from family, and we had little chance of forming our own support systems! We, too, are also living without much hope!”

“Do you want to end up in jail like me?” Dad asked. For his work in the unions, dad was jailed as part of Operation Coldstore. Life for the family was very difficult then.

We started walking along a road island, sparring words as we strode forward. We were talking louder and louder, being oblivious to the evening traffic on either side zooming past.

Oh please, I rolled my eyes, thinking about my Australian PR status, Give me some credit. With so much years after your imprisonment, I planned mine somewhat better than you did yours.

“Did you regret what you have done in the past?” I asked instead, “You made a difference in people’s lives! If you had not fought for workers’ rights, would there be a middle class in Singapore?”

“But there is a price to pay!” Dad said, exasperated, “I don’t want you to go through the same horror as I did! You should’ve discussed it with us before you did this!”

“I didn’t consult you,” I replied, “Because I knew you would try to stop me. If I’d asked you, I wouldn’t have done it!”

“I did it your way for the last 22 years,” I added, blood still boiling, “You’ve had 22 years to come to terms with me being gay! We could not talk about my relationship because you said the children were too young. And you never read a single piece of article, book or video on the subject that I passed you. Even after Lee Kuan Yew and Goh Chok Tong spoke positively about the issue*, you and mom stayed silent! You wanted me invisible forever, and that’s not what I want.”

“Han and I built a home in spite of all the odds!” I started shouting, “Over the years, my parents never visited us once! You never asked Han to come for Reunion Dinner, but always complained that the other in-laws don’t visit as often!”

It was true. I came out to mom and dad very early. Since then, they had constructed a larger closet with their wall of silence, and planned to stay in it with me indefinitely.

“You should be proud of me,” I finally said, “Like I am proud of you, and what you and mom did in your past.”

We sensed a change in mood at that point. Standing face-to-face, I believed my father finally realized he was looking at a mirror. His son understood what he did in the past.

“We didn’t visit you and Han,” Dad finally offered, “Because we respect your privacy.”

It was a pretty lame excuse: they never had an issue ‘disrespecting’ my siblings’ privacy. At least he had moved past chiding me.

I came out to my parents first because they were the most important people in the world for me. It was important to me that they know me. I would not be a stranger to them.

Instead of bringing us closer together as a family, we grew more distant. The excuses changed but the goal remained the same: hide the gay child. In the United States, I learnt from more enlightened gay right fighters that Silence = Death.

Before I came out a second time, my relationship with family and country had reached an all-time low. Migration seemed to be the best way to avoid a slow, anonymous march towards the graves. In the Pet Shop Boys’ songs, a poignant question kept ringing in my head: All the love that we have, and the love that we hide, who will bury us when we die? Han, my partner, and I secured permanent residencies in Australia (Chapter 3).

That was my last chance to tear down the walls with my parents before we finally pack our bags for Down Under. Coming out a second time, in ways more irreversible than my first time, was the only way to force a significant change. Coming out was my way of finding a deeper connection. Had I succeeded?

Shortly, my dad and I reached a cross road junction. As vehicles took turn speeding in all directions, I felt I have spoken what needed to be said. I suggested he go back home and discuss things with mom. Emotionally spent, I walked back to my car and drove back to Han.

Another 9 years had passed since I demolished the closet my parents and I built. Han and I achieved a breakthrough with our families after I came out, and decided we could stay back in Singapore. A few years ago, mom and dad started asking Han to join the Reunion dinners, and even Han’s family grew to know me.  The kids grew up a little, but were less than surprised by our relationship because I had left a long trail of LGBT sharing sessions online.

To the readers still curious, none of the kids turned gay.

One fine day, Han came back from accompanying my mom for an errand. He was beaming and grinning from cheek-to-cheek.

“Guess what,” he said to me proudly, “Your mom told me she is so glad that you have me.”

It took 3 decades for my parents to know me and my partner. It was worth it.

—
*In 2003 and 2007, former Prime Ministers Goh Chok Tong and Lee Kuan Yew spoke of greater tolerance for LGBTs in the civil service and society respectively.

Otto’s father is Mr Fong Swee Suan, a former union leader who became a key member of the People’s Action Party, but left the party in 1961 over differences in opinion about Singapore’s merger with Malaya, Sabah and Sarawak. He was subsequently branded a communist and arrested in 1963 as part of Operation Cold Store, a covert anti-communist operation.

After his arrest, Mr Fong’s father was placed under detention across the Causeway in Muar and banned from entering Singapore.