Reporting an increase in new HIV infections in the first quarter this year among gay men in Hong Kong, a government consultant also warned that prevalence of the disease in this group could hit 30 percent by 2020 if left to its own devices. HIV prevalence in this group is estimated at four percent now. 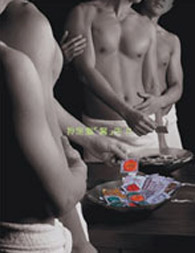 A poster promoting safe sex in Hong Kong
"If there is no intervention, HIV-infected men who have sex with men could hit 15,000 by 2020 in Hong Kong, that would be a prevalence of 30 percent," said Wong Ka-hing, a consultant with the Health Department.

"New HIV infections are increasing among men who have sex with men everywhere. Some of that is of a cross-border nature because of gay parties," said Loretta Wong, who heads Hong Kong's Aids Concern.

"Some are under the influence of drugs and they don't even remember if they used condoms. People tend to be less careful when they are overseas."

"Genetically, viruses isolated from them are very similar. From genetic sequencing, we determined they were all together (passed the virus to one another)," Wong said.

He has also urged people with a history of unprotected sex to have HIV tests, saying the findings suggested "rapid local HIV transmission" among gay men in the city with a popualtion of seven million.

The government has yet to find out how the virus spread in the bigger cluster, or if there is a "super-spreader" involved.

"We did a study recently and found that people are looking for sex partners on the Internet but we do not know if this cluster was formed that way," consultant Wong said, adding that the government was trying to promote safe sex via the Internet.

"There are many things we need to do to prevent this from escalating further," she said.

The detection of clusters of cases among gay men in Hong Kong follows regional findings that the proportion of gay men in Asia newly infected with HIV has risen sharply in recent years.